I’m sharing a parts of a recent email with Bernadette, one of Alicia’s collegues at the Chronicle. She has taken Clarabelle and passed along this (quite frankly, sometimes hilarious) update. 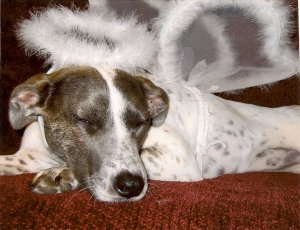 Clarabelle is adjusting quite well and doing fine. I was thinking that I should write something, but it seemed too soon. But, in a nutshell: Clarabelle is also having her ups and downs, but she really is doing fine.

As I might have mentioned, we have a very chaotic household: My son, 9, doesn’t walk anywhere if running (accompanied by sudden and unexpected soccer/skateboarding/karate movies while shouting
out various things and laughing loudly) will suffice. We let our kids use their scooters in the house (tho they don’t do it too much anymore). I’m compelled to report that the dog “landmines” (there were three scattered about)did not appear to be Clarabelle’s (never mind how I know this) but appeared to belong to Sarah, our 16-year-old Lab/shepard who regularly loses control of her hinder quarters.

The first week we had Clarabelle, Gio had three friends over on a Saturday afternoon – so we had four boys (ages 6-9) tearing through our house nonstop for about 3 hours shooting Nerf guns. Everyone survived.
It took a couple of weeks, but Clarabelle has made peace (mostly) with our two cats, and they with her. And we seem to be managing OK with Clarabelle and our three rabbits.

Clarabelle used to bark at my husband (Kevin) every night (never mind that he’s the one who feeds her every morning), but I think she’s getting a little better about that.

Early this morning (about 6:15), I coaxed Clarabelle to snuggle with Kevin in bed. Her tail was wagging, she was snuggling, her head was right next to his – and then she very unexpectedly threw up the entire contents of her stomach. I’m sorry to say that, at that moment, this seemed like the most hilarious thing I’d ever seen. Clarabelle wagged her tail through the entire event – even us stripping the sheets.

Clarabelle gets walked every day (by Kevin), and it’s wonderful. She’s a sweetie.

Anyway, that’s the news this morning. Clarabelle is doing well. We all are.